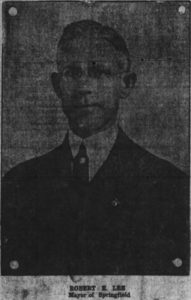 In addition to his duties as mayor, Robert E. Lee had a business with his brother, Bert Lee. The Hobart-Lee Tie Company was well known in the Ozarks for its production of railroad ties. Just two days after his wedding to Kate Cozzens, Robert left Springfield for St. Louis, reportedly on company business. A week later, on April 6, the Springfield Republican reported that he was on his way home from St. Louis, though Kate said he was in Oklahoma on business. She later told another reporter that he wasn’t in St. Louis or Oklahoma, but was “within three hours train” trip from Springfield. Not surprisingly, these divergent stories led to some confusion. His absence in general was confusing since the mayor had previously stated there would be no honeymoon because he was too busy with “city affairs” to leave town.

While her husband’s absence made news, so did Kate’s health. She was reportedly “quite seriously ill” and needed two nurses to care for her. She was experiencing “heart action” and was in a “highly nervous state.”[1]

On April 9, Mayor Lee decided to break “his strange silence” and reported that he would return to Springfield the following day and would immediately begin divorce proceedings against his new wife. He had spent a week in St. Louis with his sister, contemplating his future and what his next steps should be. He was not yet willing to reveal the details that led to his decision, other than to say that when the “realization of the awful calamity that had befallen him in his marriage dawned with full force on him, he considered it necessary to seclude himself for a sufficient length of time to be able to collect his thoughts” and figure out “for himself the solution of his problem.”

When his new wife heard of his plan to divorce her, her condition worsened. She was reported to be suffering from “severe nervous shock” due to her husband’s “desertion,” and the news of her impending divorce. An additional shock came when a reporter informed her of the rumor that Lee would accuse her of not being legally married to her recently deceases husband since she was never divorced from her first husband. She vehemently denied this accusation and said she had documents that would prove it.

Another rumor indicated that, right before their marriage, Kate had told Robert she was pregnant. She denied this rumor, as well—she said she was not pregnant when they married, but she believed she was now.[2] 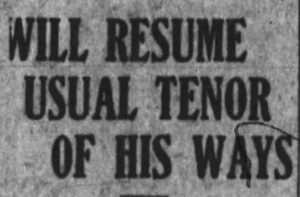 Mayor Lee returned to work and seemed to ignore the scandal. Though some called for his resignation, he was determined to complete his term as mayor and then return to private life. Despite a few detractors, he had enough support in the community and in city hall to make this possible.[3]

The scandal couldn’t be ignored for long. In early May, Kate finally left the hospital amid accusations of “alleged extravagances.” The extravagances appear to have occurred while Lee was in St. Louis contemplating his future. F. X. Heer told the Republican that he Robert owed his store $700 for items charged by Kate. Heer claimed that she had called the store the day after Lee left town, stating that she was sending her nurse and niece to the store “to make some purchases.” The pair returned the next day and spent a few hundred dollars. Heer tried to locate Lee to verify his approval of the purchases, but could not reach him. So they sent the store attorney to see Kate, who told him the purchases were in advance of a “bridal trip abroad.” Believing her, he allowed the purchases. That evening, Lee found out that Heer was trying to reach him; he called him and learned of Kate’s spending spree. Lee told Heer he to cancel any orders that had not yet been delivered, which came to about $350.

Meanwhile, though Kate was home from the hospital, she was not well. She reportedly had been kept in the hospital so long out of fear that her ‘high state of nervousness and…grief” over news of the divorce would “result in a shocking tragedy” unless she was watched. She allegedly had “twice attempted self-destruction” while in the hospital.[4]

On May 8, Robert filed for divorce. It was one month since his return to Springfield. Lee and a doctor who treated Kate were the only witnesses in court that day. Kate did not show up, but did send her attorney, who made no comment, “thereby admitting the allegations” in the divorce petition. Lee accused Kate of “cruel and barbarous treatment,” including threatening to kill him, his two children, his mother, and his brother. Within ten minutes, the divorce was granted by Judge Guy D. Kirby. The Springfield Republican reported that Kate agreed to a quick divorce in exchange for $5000. Upon hearing the news of her sudden divorce, Kate began “suffering from nervous prostration” and was not expected to live “through the night.”[5]