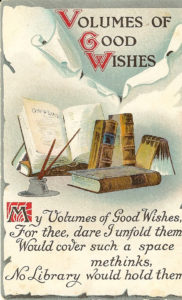 Postmarked Koshkonong, January 7, 1911 and addressed to Miss May Barnett in West Plains, Missouri:
​
Will write you a few lines. I got home all o.k. The roads wasn’t very muddy, just dusty of course. I didn’t have anybody along to push me in the mud.  Hope all you young folks will have a nice time and all, not forget me. But all not forget to attend church. May, tell Maud be very careful and not run another fellow off. I wish this card was longer so I could write more. Hope to hear from you soon. May, be sure and use my initials only for safe delivery. From Joe

That Paulette Jiles began her literary career as a poet is readily apparent throughout her work of prose set in southeastern Missouri, Enemy Women.  Giles was born in Salem, Missouri, and spent a portion of her childhood exploring the hills of the southeastern Ozarks.  It was a return to the Ozarks as an adult, for the sake of family research, that led her to write the story of a young Ozark girl’s adventures during the closing days of the Civil War.

Just six months before the end of the Civil War, a troop of Union militia burn the Colley home and kidnap the father, events that would send the Colley children into the woods and down the muddy winter roads searching for help.  While attempting to discover her father’s whereabouts, our heroine, Adair Colley, is arrested as a Confederate spy and sent to a Union prison in St. Louis.

Adair’s experiences in St. Louis serve to illustrate to her the differences between Yankees and mountaineers.  Adair realizes that she is seen as being different.  Her interrogator, a Union major, believing her to be a remnant of “some prehistoric people of the British Isles,” (78) forces her to read just to prove to himself that she can.  And though Adair can read, her accent is thick and her grammar somewhat backward, especially compared to the precise language of the major.  What Adair reads, and what the major hears, is filtered through his superior education and his perception of hill people.

It is taken for granted that Ozarkers are a superstitious group, and Ozark superstitions are scattered throughout the book, especially in regards to marriage.  Adair spends a considerable amount of time worrying about having to get married and feared marriage to the wrong man.  To this end, she threw salt in the fire, hoping in vain to see a message about her future husband.  She then tried to find his face in the water by means of a mirror over her shoulder, catching only a glimpse of her future intended before she dropped the mirror.

Though the first use of the term “hillbilly” is murky, Giles confidently inserts the term in her book. It is usually used in either a condescending or derogatory manner.  When the major warns Adair against marrying “some hillbilly” (140) there is, for him, a little affection found in the term.  But Adair knows how she is perceived by the Union soldiers.  She determines “never to be caught riding astride” (245) since it was “something only hillbilly women” would do.  She believed she had no hope of remaining safe if she appeared to be a hillbilly because hillbillies are perceived to be just ignorant white trash.  To appear to be a low-class hillbilly would mean she could not count on being treated with respect.

Jiles understands the ways of Ozarkers; she understands how we interpret ourselves and how we are perceived by others.  She does not romanticize the Ozarks, or hillbillies, but writes of them with both affection and respect.  She occasionally writes with incomplete sentences, but she will be forgiven for this because her words are beautiful to read.  She also writes without the usual dialogue punctuation and she will be forgiven this also; if it occasionally makes the dialogue difficult to follow then the passage must be re-read.  This would certainly be no hardship.

The Mysterious Death of Addie Dillard

Addie Dillard was born in Greene County in 1868, and was the youngest daughter of Robert D., a farmer, and Margaret E. Dillard, residents of Washington Township. She died on Wednesday, July 7, 1886, under “suspicious” circumstances at the home of the Nelsons, which was known as a “house of ill repute.”[1]

On July 9, the Springfield Leader and Press ran an editorial stating that due to the “very peculiar and suspicious circumstances” and the possibility of “foul play,” an autopsy should be ordered.[2] But it was too late. When Addie’s father asked county coroner, Zachariah Vanhoose, to conduct an autopsy, his request was denied. An inquest had already been held on the day of her death, at which time Vanhoose and the jurors “viewed the body, heard the statements of witnesses…and having done all that [they could] reasonably do to learn of the matter, therefore conclude[d]…that death was caused by some sudden failure of the action of the heart. As to the true nature of said heart disease…, we know not, neither do we know anything relating to complications that may have helped the matter on.”[3] As far as Vanhoose was concerned, that was the end of the matter.

Though a July 10 editorial in the Leader and Press stated that Addie was pregnant, there was no mention of this in the coroner’s report. The editorial accused a Springfield man of having “criminal knowledge of her death” and that should have been “sufficient to cause an investigation.” Local authorities apparently did not agree.[4]

The final public mention of the case was on July 11, when another editorial pointed out that nothing had yet been done about Addie’s death. The Leader and Press reported that a local physician had visited Addie two weeks prior to her death. After visiting with her briefly, the physician “refused to have anything to do with the case.” A certain young man was also said to have visited her, but was then “reported to have skipped”.

If newspaper reports are accurate, it appears that Addie became pregnant by a “young scoundrel” and subsequently felt she had to leave home because of it. But how did she end up at the home of the Nelson’s, and why did the doctor refuse to help her? We will likely never know the whole of Addie’s story. Her life, and death, remain a mystery.[5]