And the Winner Is… – Police Matrons in Greene County, Part II

By August 1902, Springfield still did not have a police matron. The WCTU had not won the battle, but was not giving up the war. Whereas:

The WCTU has for twenty years through the efficient jail and prison superintendent, satisfied the jail and city prison and done everything in their power to [illegible] and lead to better lives the many boys and girls and women who are frequently found there: Resolved, that the city council be requested to consider carefully the question of securing a police matron, who can give all her time and interest to this work, thereby saving the city many of the boys and girls who otherwise would become hardened criminals.[1]

Susan McIntire and Alice Blood were still locked in a battle for the position. McIntire had advocated for the position to be created for a number of years, while both women were involved in philanthropic work in Springfield. Both women had worked together, along with others, to found the Springfield Rescue Home. Now they were at odds, former friends vying for the same position.[2]

Susan McIntire won. Sometime during September 1902, the office was officially created and McIntire became the first woman in Springfield to hold the position of police matron.[3] In a November issue of the Springfield Republican, the myriad duties required of a police matron were listed in the required monthly report to police chief Gideon.[4] 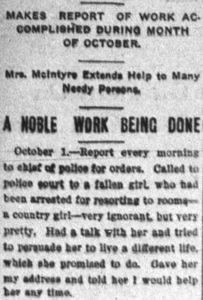 October 3 –      Called by the police to help a crippled man. Got him fed and obtained money from the county court to put him on a train. Called to see two sisters, 15 and 17, found at the fairgrounds. Raised money to have them sent home to Mansfield and money to get them on home to Ava.

October 4 – Sent by chief over to Mrs. Hayes on Chestnut and Robberson Avenue to see a sick girl who wanted to go home. Did not do anything in this case as I thought she would be well in a day or two and could go to work.

October 5 – Visited the jail. Found considerable work to do there for the prisoners—to see judges, lawyers, etc., during the week.

October 6 – A woman named Mrs. Thomas called at my house. Has two very sick children suffering from a tumor and quick consumption. Wants to go back to Douglas county, beyond Ava as soon as the children are able to travel. Referred me to Dr. Reinhoff, Mrs. Ed Drake and Mrs. Hayes, who are neighbors to her near the Boulevard, and for whom she had been working. She wants to be sent in a wagon as she wishes to take what little she has with her. She wants two dollars.

October 7 – Investigated the case of Mrs. Thomas and found it alright. Went to the county court and stated the whole case. After having talked it over they agreed to give me five dollars to obtain a wagon to take her to Douglas county, eighteen miles south of Ava. Will send her as soon as the sick daughter is able to be moved.

October 8 – Called by Judge Burks to the case of an almost blind woman with two small children and an invalid mother—a very destitute case. No stove to cook on—no provisions for clothes. Set to work and clothed the family—mother, daughter and children. Daughter said if she could get to Kansas City, she could get work in one of the packing houses—packing soap that did not take very good eyes. Went to county court who agreed to give me transportation part of the way. Will give her a letter that will take her to Kansas City, as she does not belong in and does not belong in Kansas City.

October 9 – Called to assist an old lady on South Kimbrough street in moving to Kansas City, where she had relations. Helped her sell her few things to advantage—pack her boxes, get wagon and take boxes to depot—got crate for sewing machine and had them all shipped by freight. Went to train with her—got her half rate ticket and saw her on train.

October 10 – Officer [illegible] called me to a most pitiable case of a woman with three children and sick husband in tent on lot west of old broom factory. The family was entirely destitute of anything at all. Took woman and child to mayor who referred me to relief officer, Witten, and stated the case. Begged enough provisions for immediate wants. Mr. Witten furnished them a stove.[5]

And so it went, in excruciating detail, for the rest of the month. The Republican reported that “Mrs. McIntire is one of the busiest women in town and she is continually besieged by people looking for help.”[6]

McIntire got the appointment, but “Springfield’s untiring police matron” did not receive the pay.[7] Despite the daily grind of work that was the lot of police matron, she went unpaid by the city. She received a stipend from the WCTU, but continually had to beg for money to cover the costs associated with her job.

Stay tuned for Part 3 and the baby wars between Blood and McIntire!