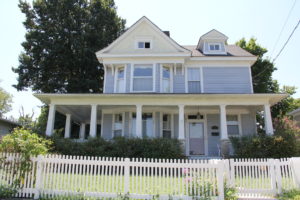 On July 25, 1894, “George McLaughlin,the handsome young attorney, presented to  the local department of the [Springfield] Leader today a tomato 15 inches in circumference.This gigantic vegetable was grown in his own garden.”

That “handsome young attorney” was born in Springfield, Missouri, in 1873. He attended Central High School and Drury College and then moved to Lebanon, Tennessee, to attend the Cumberland School of Law.

In 1899, George married Rosa Nell Batch, who was known affectionately as “Nellie.” The couple had three children that lived to adulthood: Stephen W., Lillian, and Anna.

Another house preceded the circa 1904 construction of the McLaughlin house on this lot in M.M. McCluer’s addition, which was first platted in 1867. Local folklore says that George built the  house for Nellie, but it does not appear that the McLaughlin’s were the first occupants of the home. From 1903 to 1906, William J. Wood and his wife, Nellie, lived at this location. At the time, William was a travelling salesman for the McGregor-Noe Hardware Company, but he eventually became president of the Wood-Beazley Seed Company. 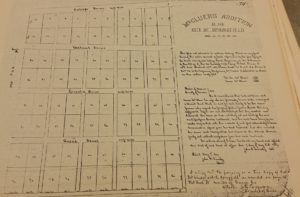 George and Nellie lived in this beautiful Queen Anne-style home from 1907 until 1914. Though George was an attorney, he also dealt in loans and real estate and, in 1909, had an office in the Union National Bank located on the public square. Curiously, he is listed as a farmer in Wilson Township in the 1900 census. Even more curious is his listing in the 1910 census living with Nellie and their three children in McDonald County, Missouri, where they were renting a home and even had a servant. The next record, from 1912, has the family back in their home on W. Walnut Street with George working in real estate. By 1915, they had moved to a new home outside the city limits. In 1920, they were back on Walnut Street, living near the Keet-McElhany house in a home that is no longer extant. 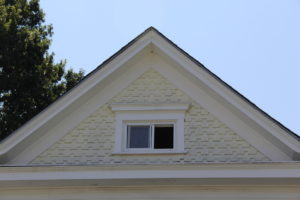 James L. Robertson and his wife, Mollie, were the next family to live in the house. James was the president  of Robertson Grocery Company. By 1920, he was a merchant at a local seed company. James and Mollie lived in the house for several years before moving to Elm Street.

By 1925, Elizabeth Graffius was the new owner and by 1931 she had converted the former family home into apartments. As a widow, she may well have needed the money that renters would provide. The house experienced several owners throughout the following decades and remained an apartment building during most of those years. At any given time, the McLaughlin house was home to anywhere from four to six tenants.

The 1957 assessment shows the house contained 14 rooms, though how many of those were due to being divided into apartments in unknown. The house sits on a quarter of an acre near the downtown area and, despite interior changes, has thankfully been preserved. 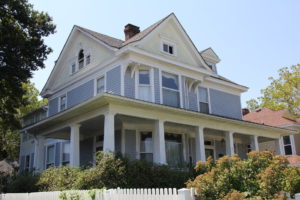